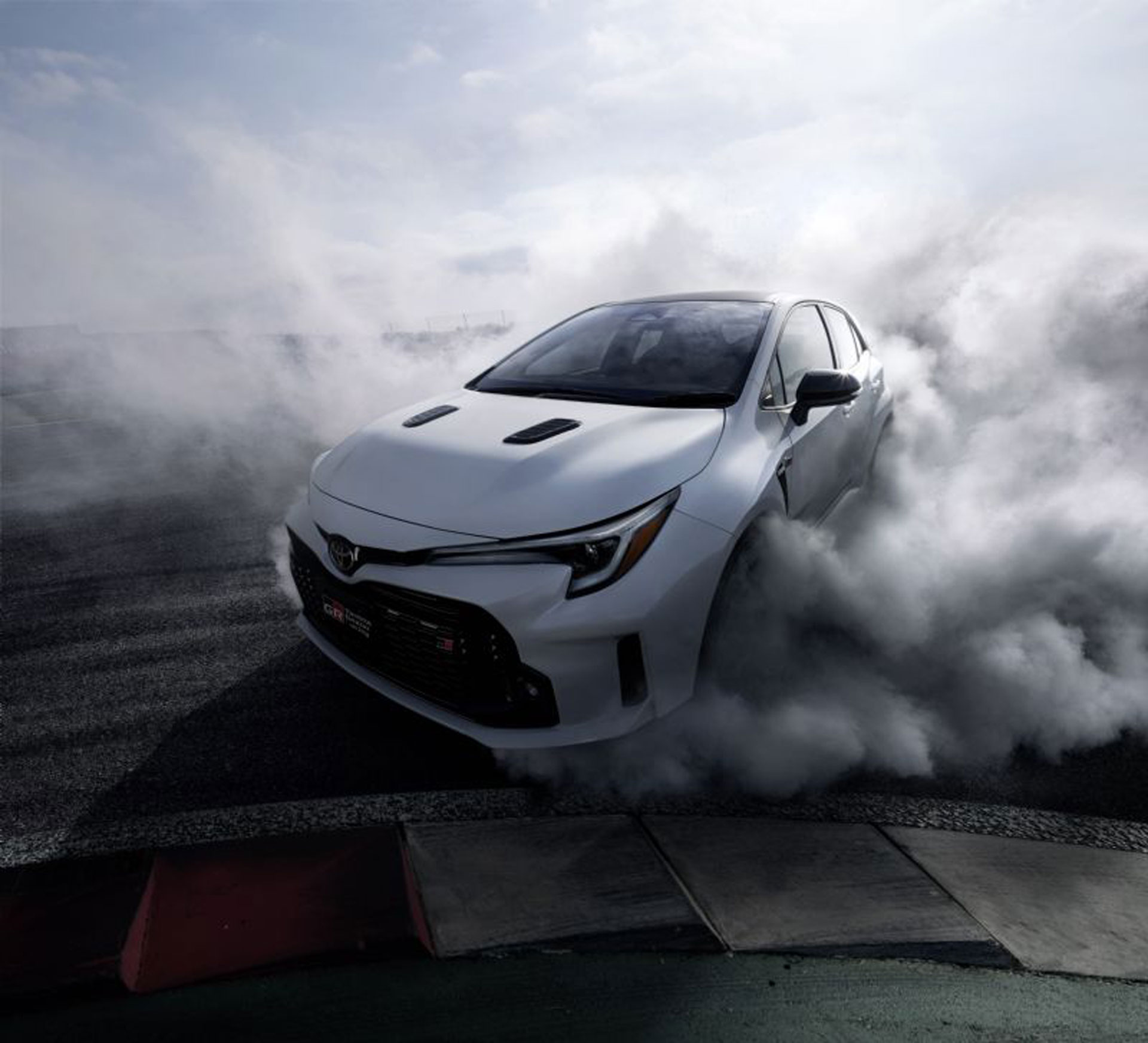 Scheduled to arrive locally in the final quarter of 2022, GR Corolla will be the fourth GR sports-car model to be launched in Australia, joining the GR Supra, GR Yaris and the upcoming GR86.

A valve-equipped triple-exhaust muffler improves airflow, unleashing maximum output of 220kW from the intercooled turbo engine, a gain of 10 per cent.

GR Corolla prototypes included a race car powered by a hydrogen-fuelled internal combustion engine that competed in last year's Super Taikyu endurance series in Japan with a "drive it until it breaks and fix it to win" approach.

Based on the high stability provided by the long-wheelbase GA-C platform, the GR Corolla hatch commands a high level of cornering performance, starting with wider fenders front and rear than a standard Corolla hatchback.

Cooling and aerodynamics also benefit from a front-bumper air intake, along with air outlets for the front fender and bonnet bulge.

The GR Corolla's GR-FOUR system, which uses an electronic multi-plate clutch to provide variable front and rear driving force, has been upgraded for maximum control when pushing the car to its limits.

Body rigidity has been strengthened to achieve driving performance that responds instantly to driver operation.

In addition to the highly rigid frame made possible through production at the GR factory within Toyota's Motomachi plant, braces have been added between the rear wheel wells, to the under-floor tunnel, and under the floor in front of the fuel tank to improve handling stability.

The latest Toyota Safety Sense3 package assists in providing safety and security in daily driving while enhancing the driving pleasure of a sports car.

A hand-operated parking brake has been used to allow better vehicle control even when pushing the car to its limits, such as when drifting.

The instrument cluster incorporates a thin-film transistor meter. Inspired by race cars and reflecting insight from professional drivers, it is designed to be easily visible during sporty driving.

Completing the package, the GR Corolla hatch retains a five-passenger layout that ensures it is equally equipped for daily life as well as driving pleasure.


Corolla has a motorsport DNA

The GR Corolla sprang to life based on the strong desire of Mr Toyoda to "bring back a Corolla that captivates our customers".

Since the birth of Corolla in 1966, the nameplate has continually evolved into a variety of body styles to meet the changing lifestyles of Toyota customers.

Toyota has successfully used motor racing to introduce Corolla to the masses, building a proud motorsport heritage that has underlined its durability and reliability.

In Australia, Corolla has a long and successful motorsport record, helping to forge the car's reputation as durable, reliable and fun to drive.

Class victories at the Bathurst 500 enduro in 1968 and 1969 effectively put Corolla on the motorsport map.

It won a further eight consecutive class victories at Bathurst from 1985-92 and compiled a string of touring-car victories and success in rallying.

Toyota achieved its first World Rally Championship victory in 1973 in the Press-on-Regardless rally in the United States, followed in 1975 by a stunning victory in the 1,000 Lakes Rally in Finland.

With the GR Corolla joining the lineup, it is clear the Corolla series will continue to evolve.

Enquire about the GR Corolla at City Toyota

1. Product and company names are trademarks of their respective owners.
2. All specifications are based on an overseas model; specifications and features for Australian models may differ.
3. Driver assist feature. Only operates under certain conditions. Please drive safely.